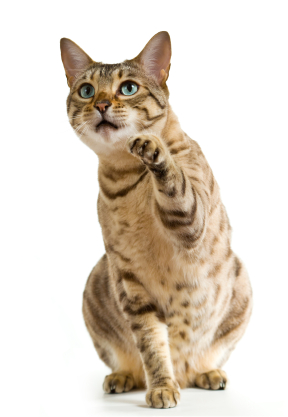 The expression “In Heat” refers to the condition of Oestrus. This is the time in the reproductive cycle when the female (queen) displays interest in mating. Queens may be very demonstrative. They rub against anything, crawl with their belly close to the floor with their tail elevated, roll and vocalize with a deep, throaty growl. Some individuals can mature such that they come in heat as early as five months of age but with most cats it is somewhat later at seven to eight months. This is why it is advisable to have them spayed at five to six months.

A spay operation (ovario-hysterectomy) involves making an incision through the skin and muscle wall into the belly (abdominal cavity). The uterus in cats is Y shaped and each arm (horn) extends right to the ovary on each side (there is no fallopian tube). The uterus is identified and exteriorized. The surgeon then follows the body of the uterus to the ovary and then exteriorizes it. The blood vessels to the ovary are then tied off (ligated) and then cut. The procedure is repeated on the other side. Both arms of the uterus are then followed down to the cervix. The body of the uterus next to the cervix is then compressed between the ends of a special instrument, then tied off (ligated) and severed from the cervix. The abdominal wall is then sutured as is the layer under the skin using dissolving sutures. Lastly the skin is sutured using dissolving sutures that are hidden under the edge of the skin to reduce the chances of the patient licking or chewing at them.

Unfortunately, when cats are in heat the uterus becomes grossly enlarged and becomes 10 to 20 times the diameter of a normal uterus with a grossly increased blood supply and extremely fragile tissues. This makes the operation very much more difficult and increases the risk of complications. Cats in heat sometimes will stay in heat for long periods or until they have the physical stimulus of breeding.  Some will go out of heat for a few days and then go back in.  It is very difficult to assess whether or not they are still in heat even after waiting for a few weeks.

Currently, there are no safe medications available to suppress oestrus.  Surgery remains the best option for bringing cats out of heat.