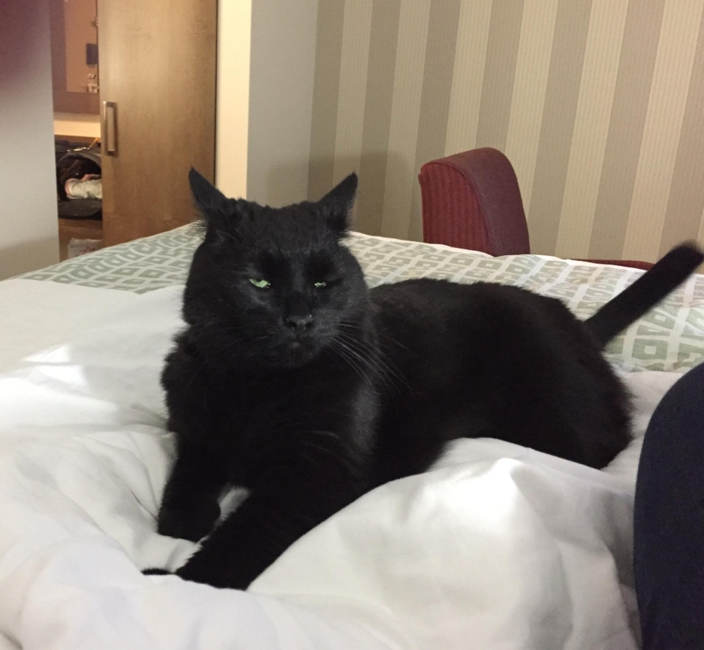 Goodbye to Our Clinic Cat, Taystee

A few weeks ago at a staff meeting the discussion of Taystee’s retirement came up. Although she made a fine clinic cat it was time for her to move on to her forever home.

We all agreed that she would be happier in a home with more consistency and more attention. She got pets from our clients and cuddles from our staff on lunch breaks it’s not the same as being in a home. We come to work, we say good morning and feed her, and then we are off taking care of patients and clients and running the clinic. At the end of the day we left.  She was alone.  There was no bed with a warm body to cuddle up to, no lap to watch TV on, and no windows that open for fresh air.

We wanted more for Taystee. She deserved it.

As one of the people here who knew Taystee the best, I was asked to take the lead on finding her a new home. The first thing that came to mind was how much she loved Dr. Liz Bolton and how much Dr. B loved her. I could not in good faith put out a call looking for a new owner for her without letting Dr.B know first. I sent her a text explaining the situation. Within 10 minutes I had a response saying yes, she would take Taystee! Within a week she had her flights arranged and was coming to get her! I am still blown away that she was willing to fly all the way up here from North Carolina to come for Taystee. They have a very special bond.

The countdown was on. “10 more sleeps, Taystee” then “two more sleeps until we see Liz!” I think she knew, she had even more attitude than normal those last 10 days. She was going to make sure she left her mark on us and that we would never forget her, not that we ever could.

October 23 was the big day. I was to collect Taystee from the clinic and bring her to Liz’s hotel room near the airport. I had been having restless dreams for the past few days about making sure her travel documents were in order and I didn’t forget anything. I was nervous about her traveling in the car. This is a cat who lives at the vet so I had no idea how she would tolerate being in a vehicle.

I arrived at the closed clinic at 10am, Taystee immediately starting happily running around after me as I collected her things. “We’re going to see Liz!” I told her.  I think she must have understood, she was bouncing around with excitement. As most people have experienced  when you are getting ready to go to the vet or leave the house –  the cats know. And they hide. I was expecting Taystee to act like she knew something was up as I packed up her bed and food and got her carrier ready. But she just sat there and watched me.  Maybe she is so used to seeing kennels out that she didn’t think anything of it, or maybe she understood she was going home. She protested only slightly when I put her in the carrier and took her out to the car but she was quite for the entire ride. I was so impressed!

We had a small delay trying to get through downtown weekend construction traffic and arrived at the hotel around 1130am. Liz met us in the lobby and led the way up to her room. Cats are neophobes (I learned this from Liz), afraid of everything new, so I was expecting Taystee to be nervous about the hotel room and hesitant to explore like most cats are when in a new place. But when I opened the kennel door she came out tail up and confident going straight to Liz for head butts and pets. After hugs and purrs all around for few minutes Taystee reverted to the attitude she is known for and started meowing (more like yelling, actually) at Liz, I swear she was asking what took her so long to come back for her! There was not a moment of hesitation in Taystee, she knew her Liz was back and felt totally comfortable exploring the hotel room.

I stayed a few minutes to say my goodbyes and gave Taystee hundreds of little kisses from everyone who loved her. I wanted to give Taystee and Liz their space to bond again. It was an emotional goodbye but I didn’t doubt for one second that I was doing the right thing and that Taystee was finally in her rightful place with Liz. I shed a lot of tears that day, and I am trying not to now as I write this, I will miss her so much, but I got a text from Liz when I got home saying that she was trying not to cry because she was so happy to see her again. It made it all worth it.

The last update I received was that Liz and Taystee had just arrived home. Taystee was a fantastic traveler and is settling in nicely. They are both very happy to be together and I am grateful to have been able to facilitate this special reunion.

Taystee kneading the bed and happy in the hotel her first night back with Liz.