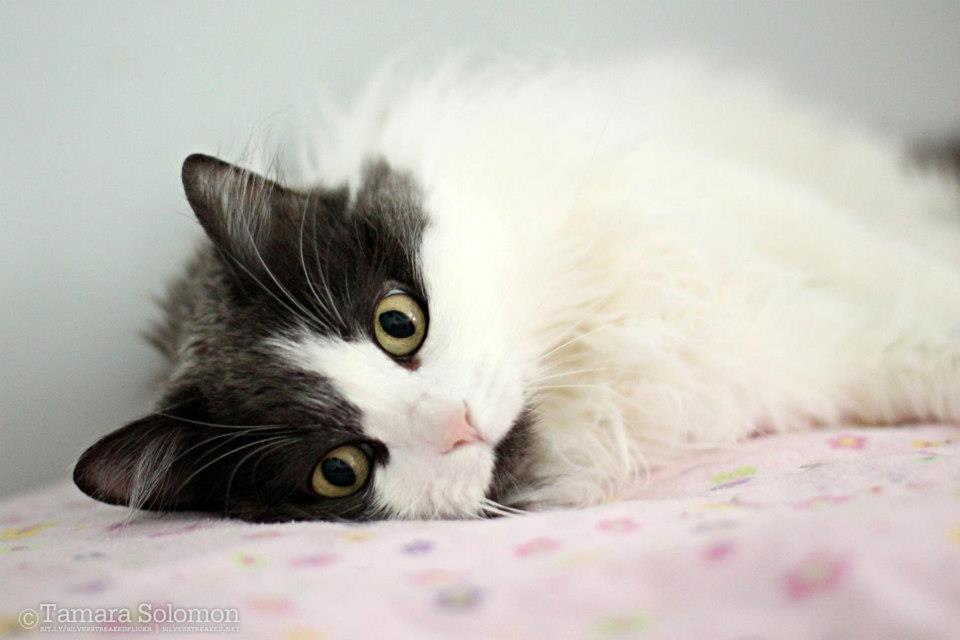 This month our cat of the month is….two cats! Faith and Grace are sisters who are two beautiful Domestic Longhairs who have an amazing owner.  They are both very shy, but lovely cats who are very gentle and loving.  They did not have the best starts in life, but thanks to the patient and compassionate care of their owner, Rebecca, they are two of the sweetest cats we treat here at Killarney.

Faith and Grace have similar conditions; they both have chronic diarrhea and vomiting. These symptoms are quite ubiquitous with many conditions, so diagnosing and choosing the appropriate treatment plans for them was a long process.

The first step was to try a food trial and test if their problem was a food sensitivity/allergy.  Cats are most often sensitive to the protein in their diets, so trying novel proteins, such as duck or venison, can help issues.  Another option is a hydrolyzed protein diet.  Hydrolyzed protein has been broken down to the point where the body can still utilize them effectively; however, the body no longer recognizes them as something to have an immune response to.  The girls did respond well to the novel protein diet and are now fed a duck protein diet.  This did not solve their problems completely though.

The next step was to perform laboratory tests.  We tested their feces, blood, and urine.  The fecal tests were to rule out parasites and other organisms infecting the cat’s digestive system.  It also screened for viruses that can be diagnosed through fecal testing.  These tests showed nothing specific.  We also did laboratory testing on their blood.  This was able to rule out other diseases where vomiting and diarrhea are side effects of a more serious issue.  Our comprehensive test was able to rule out kidney problems, liver problems as well as endocrine problems, specifically, diabetes and hyperthyroidism.  Our next step was to perform gastrointestinal (GI) specific tests.  These tests showed some significant findings and helped lead us to some effective treatments.  The test ruled out pancreatitis, a common cause of GI clinical signs.  It also found that both cats were deficient in Vitamin B12.   Although the test confirmed this, Vitamin B12 deficiencies are not uncommon with any GI associated illnesses and can in fact contribute to the clinical signs (vomiting and diarrhea).  Their urine tests were able to also eliminate other diseases.

Although we were able to eliminate many serious diseases through the laboratory tests, we still did not have a definitive answer to the cause of the GI problems.  The likely cause was Feline Inflammatory Bowel Disease.  This is an idiopathic disease that is not curable, but it treatable.

We prescribed our tried and tested medications for diarrhea with Grace, as that is her primary issue.  We were giving her an antibiotic and anti-inflammatory to help with her inflamed bowel.  If any of our clients are familiar with Metronidazole, you know this treatment is an extremely bitter and bad tasting medication.  Grace had to board with us so we could administer the pill, as her owner was having a difficult time with it and did not want to damage the trust she had worked so hard to earn from Grace.  We had moderate success with this, but the diarrhea would always come back shortly after the course was finished.  In the end we found success with a Vitamin B12 injection and a steroid cream that is rubbed on her ear flaps.  Grace tolerates this well and along with supplementation of yoghurt and pumpkin puree added to her diet, seems to be responding well.

Faith was a little trickier to diagnose and treat. Her diarrhea cleared up after a treatment course of an antibiotic, but she was vomiting on a daily basis. We prescribed an anti-nausea medication, which helped, but we did not have a diagnosis.  Chronic vomiting can, unfortunately, indicate a possible mass within the GI system.  We wanted to make absolutely sure that Faith did not have cancer.  We initially took x-rays of her abdomen to check for masses.  These radiographs did not show us anything definitive.  Our next step was to refer Faith to Western Veterinary Specialist to get an ultrasound.  The results of this ultrasound showed that the problems were unlikely to be cancer and more likely to be Inflammatory Bowel Disease, just like her sister.  The specialist recommended a long course of Metronidazole along with another antibiotic drug specifically for the GI system.  After much discussion and consideration by Faith’s owner and our Dr. Bolton, it was decided that because of Faith’s long journey of trust issues, due to her previous life experience, that giving her a long course of unpleasant medications would negatively affect her quality of life and her bond with her owner.  Faith will be treated with the anti-nausea medication, the duck-based diet, B12 injections, and the same pumpkin and yoghurt that Grace is on.  If her diarrhea returns, only then will we turn to the course of antibiotics.

As of today, Grace and Faith are doing very well.  Although their Inflammatory Bowel Disease is not curable, it was treatable. They are now enjoying a great quality of life with their amazing and diligent owner Rebecca. 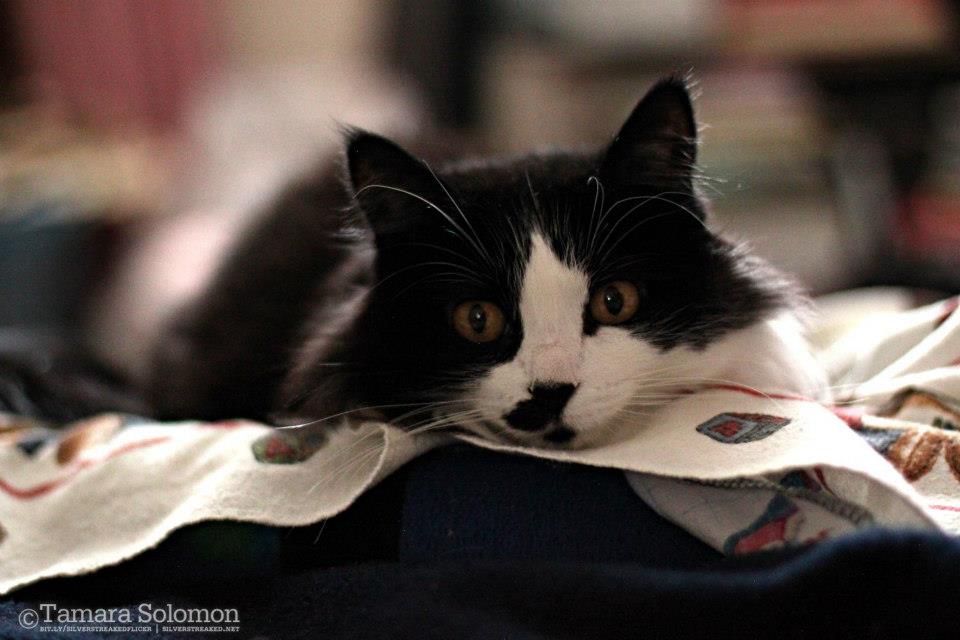