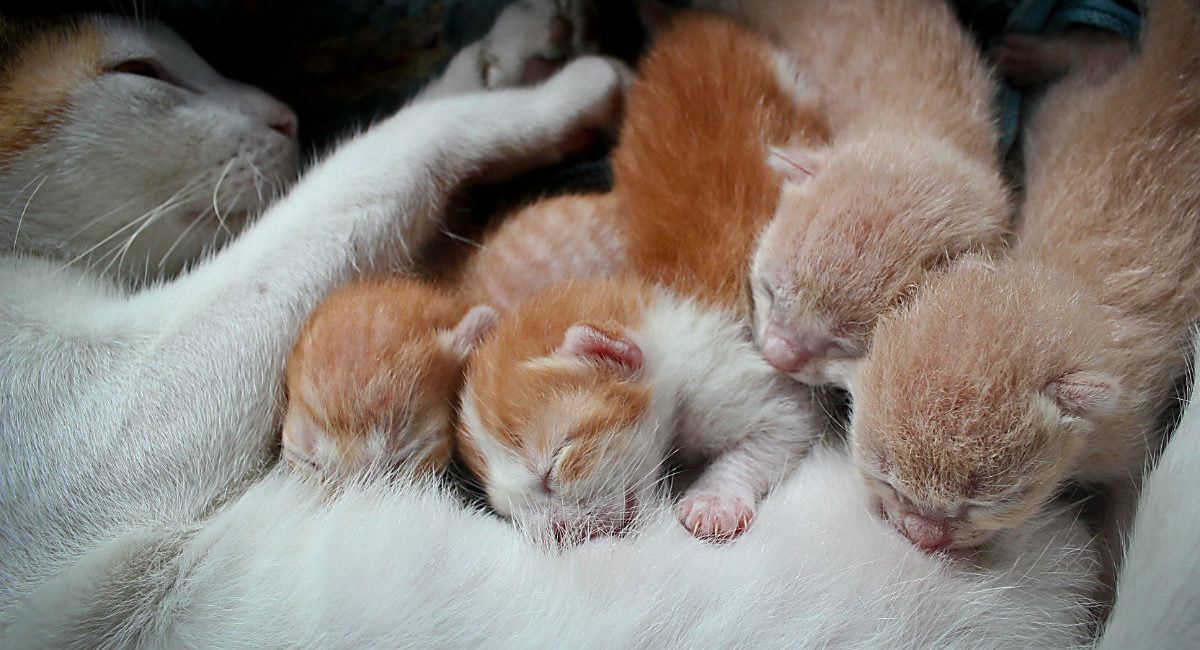 While we love kittens as much as everyone else, spring is an unfortunate reminder of the pet overpopulation problem we have worldwide. While cute, there are not enough homes for the endless supply of kittens that our favourite felines can produce. Did you know that in the spring we see female cats go into heat as early as five months of age, and have a litter by their eight-month birthday?

They can have two litters a year, and assuming only four kittens make it per litter (2 male, two female), the resulting cats can repopulate to 376 cats in just three years! Most queens (the proper name for an intact female cat) have eight nipples and often have 5 or more kittens. The most significant litter I have ever seen was 12 kittens to one queen! It’s also true that there can be multiple fathers to a single offspring.

Intact boy cats have a more significant urge to roam and find females, which means more fighting. The testosterone they produce makes their urine smell more strong. With the overactive scent glands they have on their tail, this can create a greasy/bald area mild tail. All this fighting means they are more prone to coming in contact with feline leukemia or feline immunodeficiency viruses in addition to the standard scratches and abscess’. In addition, they are more likely to mark their territory by peeing on whatever they think is theirs!

Intact females are coming in and out of heat, or having kittens have up to 90% greater chance of developing mammary cancer later in life. Other issues include potential uterine infections, abortions or difficult births resulting in the need for emergency surgical intervention. Even one single heat cycle increases a queen’s
risk of mammary cancer.

Observing all these health issues, in addition to the difficulty finding homes for all the kittens and the costs associated with them, is why we recommend Fix By Five. All cats should be spayed or neutered by five months of age (even more critical this time of year as they do come into heat early based on the increasing day length).

For the boys, the procedure is relatively short while for the females it is the equivalent to a human woman having an ovariohysterectomy (removal of the ovaries and the uterus). We recommend blood and viral testing for every patient to better understand their risks associated with undergoing general anesthesia. Each patient is carefully monitored and supported with IV fluids, oxygen and a dedicated, trained animal health technologist. Of course, we also provide multiple techniques for pain control and prevention so your kitten can go home and act as nothing happened.

If you have any questions about why we recommended spaying and neutering your pet or just want any more information, in general, please feel free to call the office!