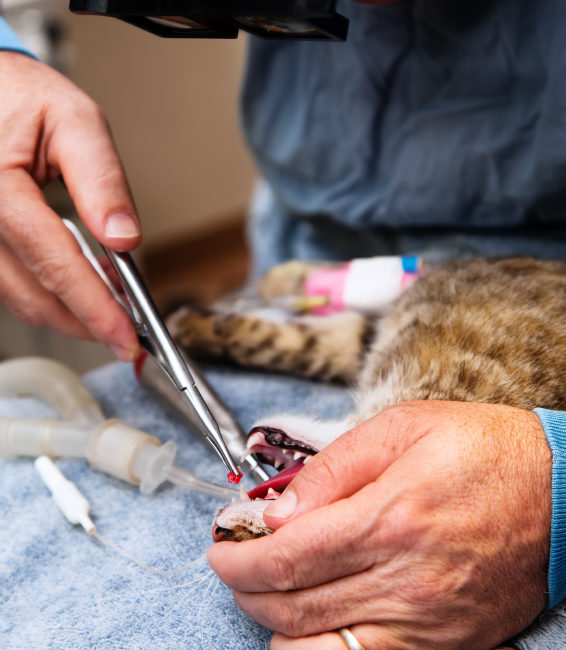 Naomi was hungry! How dare her mommy not feed her the usual breakfast. And Naomi was mad! She was captured while lounging in her favourite sun beam and now she was in the vet’s examination room. The two of them were talking about her big day – she was about to have her first dental cleaning. The room was scary. She just wanted to stay in her carrier and hoped her mom took her home soon so everything could be back to normal.

Instead, her mommy left! Handed her over to these strangers and just left! Our Killarney Cat Hospital veterinarian reached in to lift her out of the carrier. The strangers told her she would be getting pre-anesthetic testing before being sedated. They held her gently and spoke softly while they collected their samples. That wasn’t so bad, thought Naomi.

Next she was placed in a nice smelling kennel with a warm blanket to lie on. She settled in and watched the hustle and bustle around her.

There were cats everywhere – some staying while their family was on holiday, some young playful kittens that were up for adoption and another older kitty that was in for the morning to get x-rays. The people were moving about, talking nicely to all the kitties and getting everything set up.

Just when Naomi was getting comfortable, two of the technicians came up to her kennel and gently lifted her out. She heard the veterinarian saying, “Everything looks good with Naomi’s lab work, except her kidney values are slightly elevated. Let’s get started on her but make sure we have the IV fluids set for a bit longer after the procedure to help her body clear the drugs better.”

She was held firmly and felt a small poke along her back. She hissed and told them in her very bad kitty language that she was extremely displeased with that! But then she started to feel very sleepy. Her eyes became heavy and she…

She opened her eyes. The world looked funny. Her mouth felt funny. One of the technicians was looking at her and speaking softly. “Good morning sweetie” she felt herself bundled in some soft blankets and placed on a warm mat. In fact, everything was nice and warm and cozy. She snuggled up and tried to remember what had just happened. She felt so comfortable that she just dozed off.

Before she knew it, one of the technicians (the one who gave the best chin scratches) was looking at her and saying it was time to go home, her mommy was here.

She heard her mommy’s voice talking with the veterinarian at the Calgary animal hospital.

“Naomi’s dental x-rays showed three of her teeth had resorptive lesions under the gum line, so they needed to be extracted to stop the enzymes from spreading to her healthy teeth and damaging them. Also, one of her canines had a pocket beside the tooth that allowed food particles to get stuck and an abscess developed around the root structure, so we ended up having to remove her canine too.”

Her mother exclaimed “but how will she be able to eat with teeth missing?”

“Cats have 30 teeth and we only removed 4 of them today. Many cats have trouble with the specific teeth that we extracted today as early as 3 to 5 years old and I am surprised Naomi didn’t have a problem before now. I would guess with how Naomi’s mouth must have felt these past few months, she was actually having more difficulty eating before than how she will feel now that those problem teeth are gone.”

Her mother confessed how Naomi did start shying away from the dry kibble and was asking for the canned food more lately.

The veterinarian said “that’s great because Naomi will need to continue eating the canned food while her mouth heals. And we would love to see you both back in 14 days so we can check up on how her mouth is healing and address any other concerns you may have at that time. Don’t forget to feed her wet food, and since her kidney values are showing early stages of degeneration, I can show you an excellent canned food that is balanced for her needs.”

That was all Naomi heard before that nice technician opened her kennel door and scooped her up, saying that her mommy was so excited to see her. Naomi was still feeling a little strange but she was so happy to be going back into her carrier and headed home again.

That night when she snuggled down into her favourite spot on the bed right next to her mommy, she dozed off thinking how today didn’t turn out that bad after all.