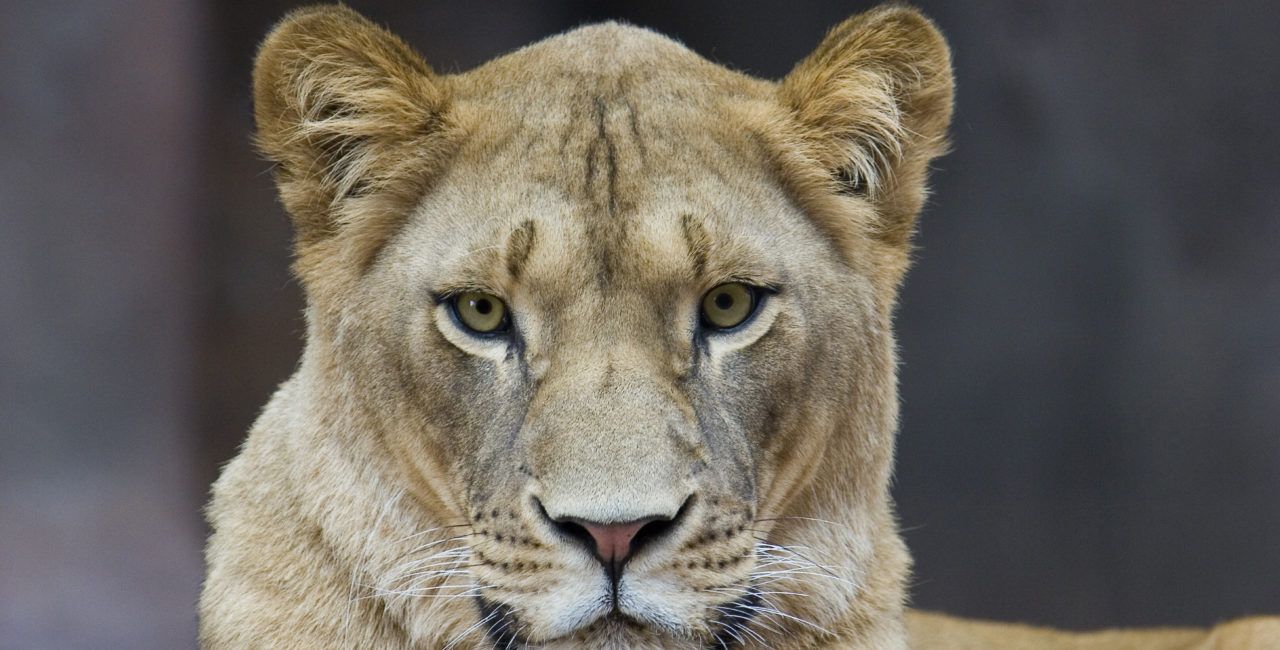 The Pussy Cat by Dr. Hannigan

“So, where is she?” I said. “In the back of her Den” said Joe the keeper. I was peering into an outdoor compound ringed with heavy iron bars looking for the two year old lioness whose home this was. It was about 20’ X 20’ with a concrete floor and none of the environmental enhancements that are generally seen in modern zoos. The back wall was a façade of rock with a large hole in it, the large hole being the entrance to the lioness’s den. This was 1971 and I was doing some locum work for a veterinarian who had a mixed practice near Edmonton, Alberta.

On arrival at his practice that morning he had issued me with the basic tools and boxes of medicine that go along with veterinary practice and sent me off to the local “Game Farm” to attend to some of the animals. When I met Joe the keeper he had decided we would look at the lioness first. “Is there any sort of mechanical restraint available in the lion’s compound?” I asked. “No” said Joe “she’s just a big pussy cat really. She was hand raised until she was about six months old and is used to us coming in her cage. You’ll have no trouble with her”.

“So what’s the problem with her then?” I asked. “There’s a bit of a lump on the right said of her neck” said Joe. “I noticed it last week”. It was with some considerable relief that I received this news. To try and do a thorough medical examination on a full grown lioness without some kind of mechanical restraint would be a most difficult undertaking and we did not have the range of chemical restraints that are available in this day and age. Even if I had been provided with them there was no pole syringe or dart gun with which to administer them.

“So how do you propose that I examine the lump?” I said. “Oh” said Joe “we normally just go in the cage and she comes out of the den and walks right up to us. You should be able to just get a feel at the lump”. “Has she been fed?” I said, not wanting to be breakfast for an adult lioness of some two hundred and fifty pounds weight. “Yep!” said Joe. “We fed her about an hour and a half ago”.

Joe unlocked the gate of the cage and held it open for me to enter. In I went expecting him to follow when the gate clanged shut behind me. “Aren’t you coming in too?” I said. “No!” said Joe. It’s safer out here. “Do you have a gun with you, just in case?” “No” said Joe. “I told you she’s just a big pussy cat”.   At this point the “big pussy cat” came out of her den and on seeing a stranger in her cage stopped and did the classic alarm behavior of a surprised lion which is to make a loud and repeated deep “Huff, Huff“ sound.

I stood absolutely stock still in the middle of the cage breaking out into a sweat despite the fact that the temperature was in the low single digits Celsius. By now, the “pussy cat” was uttering low growls and started walking towards me. She did not approach me directly but circled around me getting closer and closer with each circuit. “She’s settling down a bit now” said Joe encouragingly. Eventually, the growling stopped and she came even closer and eventually started rubbing her face on my leg with each pass in classic “pussy cat” style.  On one of these close passes I was able to put my hand on her neck and felt the lump. “Good news” I said to Joe “it’s only a sebaceous cyst. These things usually just stay dormant”.

When the “pussy cat” made the next pass I made the mistake of giving her a firm pat on her side just like I would do with a big friendly dog.  Oops! Cats don’t like that. She swung round and batted me on my upper leg with her front paw digging her enormous claws in and snarling open mouthed at me.

I stood absolutely still for what seemed an eternity. She retracted her claws and started pacing again. I started shuffling sideways towards the gate very, very slowly  until I was through it and Joe had shut it again. I looked down at my leg and saw blood seeping through a small tear in my jeans.

Only then did I relax and breath normally again.

All rights reserved. No portion of this article may be copied or reproduced without the permission of the author.