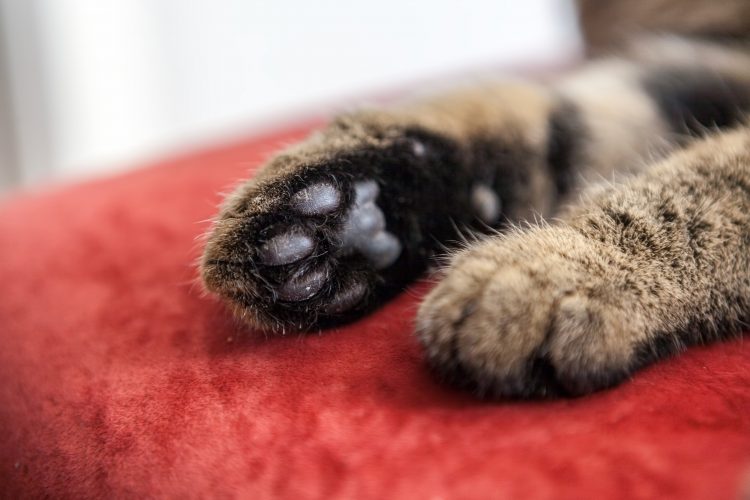 A good Samaritan saw him being hit by a bus and brought him into my veterinary hospital in Forest Lawn, Calgary.  Surprisingly, he was not in shock or displaying any other abnormalities other than being completely lame on his left hind leg.  He showed no sign of pain or discomfort and all he wanted to do was cuddle and if left alone in a cage he would march, limping, up and down in front of the bars, and howl and scream until someone picked him up all the time not letting on to the great pain he must have been in.  It seemed the most important thing to him was human contact.  In this respect, he seemed almost dog like which is why the hospital staff started calling him Rover.

Rover was about three months old, feline male and appeared to be a cross between a Siamese and a tabby cat.  On the x-ray of his leg, it was clear that he had suffered a fracture of the femoral neck which connects the ball joint of the hip to the upper leg bone or femur.  There was also a fracture just above the knee joint through the epiphysis or growth plate.

With a personality like that it was quickly decided that we would do our best to repair his badly damaged leg for him. This would mean an operation to try and effect a repair.  Once in surgery, an incision was made through the skin along the whole length of his upper leg from below the knee to above the hip. On parting the skin, we were shocked to find that all the muscle attachments to the bone shaft had been destroyed because it literally fell out onto the operating table.  We knew that the tendon and muscle attachment to the piece of femur attached to the knee were intact but were shocked that all the hip muscles which attach to the upper part of the leg bone had been separated as well.

They were still attached to a tiny piece of bone called the greater trochanter and the fracture of it from the femur had not been apparent on the x-ray. The plan had been to remove the broken ball joint from the socket because once the attachment to the femur has gone it has no blood supply and therefore will not heal back onto the femur. Then we would have just reattached the femur to the part still attached to the knee joint.  The fact that the shaft of the femur had no muscle attachments meant that it had no blood supply and was, in essence, dead.

It seemed like the only choice was to amputate the leg.  Amputation is not something vets do unless there is no hope of saving a limb and there was a chance that if we repaired the fractures that the bone shaft itself would act as a bone graft giving a scaffold structure which might allow the leg to heal.  WE decided to take that chance because we could amputate later if the graft did not work.  The femoral head (ball joint) was removed, the jagged fracture site where it had been attached was made smooth with a bone rasp, the greater trochanter was reattached with special surgical wire and the use of a tiny bone drill.  Lastly, a metal pin was driven down the shaft of the femur and into the piece that was still attached to the knee.  The muscle bundles were sewn together and lastly; the skin incision was stitched closed.

By the next day, Rover was actually walking on the leg with only a slight limp.  The problem was that until things were well along with the healing he could not be allowed to do all the wild things a normal kitten would do lest the repairs should fall apart.  This meant compulsory cage rest!  Not something that suited Rover at all.  Things were progressing well until after about four weeks, Rover succeeded in evading one of the nurses when his cage was opened for cleaning.  He jumped to the ground landing quite heavily where upon he was quickly grabbed.

Rover went on to live for eighteen years.  He always had a slight limp because of the leg being shorter than the other but it did not seem to hold him back.  He continued with his dog like behaviour and my children were often late for school because they would find him behind them at the bus stop and would have to carry him back home.  I still miss him.